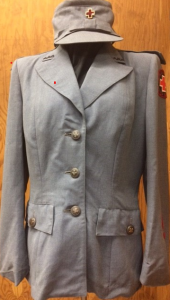 Since the United States first declared itself an independent nation, American women have found ways to serve their country. From their days as cooks and nurses to combat positions, the roles of women have evolved within the military.

Today, there are no limits to what women can achieve in the military! Women serve as pilots carrying troops and supplies, serve aboard hospital ships and in mobile medical units, crew planes and helicopters, direct artillery, drive trucks, run prisoner-of-war facilities, serve in port security units and military police units, as well as, do a myriad of communications, intelligence, supply and administrative jobs necessary for military success.

Beginning January 1, 2016 all women may apply for combat positions within the U.S. Military.

In honor of Women’s History Month, artifacts from our collection will be on display to help visually chronicle the story of women in the military. Visit Soldiers & Sailors beginning on Thursday March 12th through the end of the month to see this exhibit. The exhibit is complimentary with museum admission.