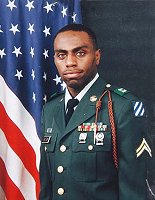 Staff Sgt. Stevon A. Booker, a 3rd Infantry Division Soldier who was assigned to Company A, 1st Battalion, 64th Armor Regiment and killed in action in Iraq during the Division’s “Thunder Run” on April 5, 2003, is slated to be awarded (posthumously) the Distinguished Service Cross – the nation’s second highest award for valor – in Pittsburgh, April 5.

He was originally awarded a Silver Star for his actions that day. However, following a comprehensive review directed by former Secretary of Defense Ash Carter of all awards issued during Operation Iraqi Freedom, it was determined that Booker’s award would be upgraded to the Distinguished Service Cross.